The Truth About U.S. GDP Growth 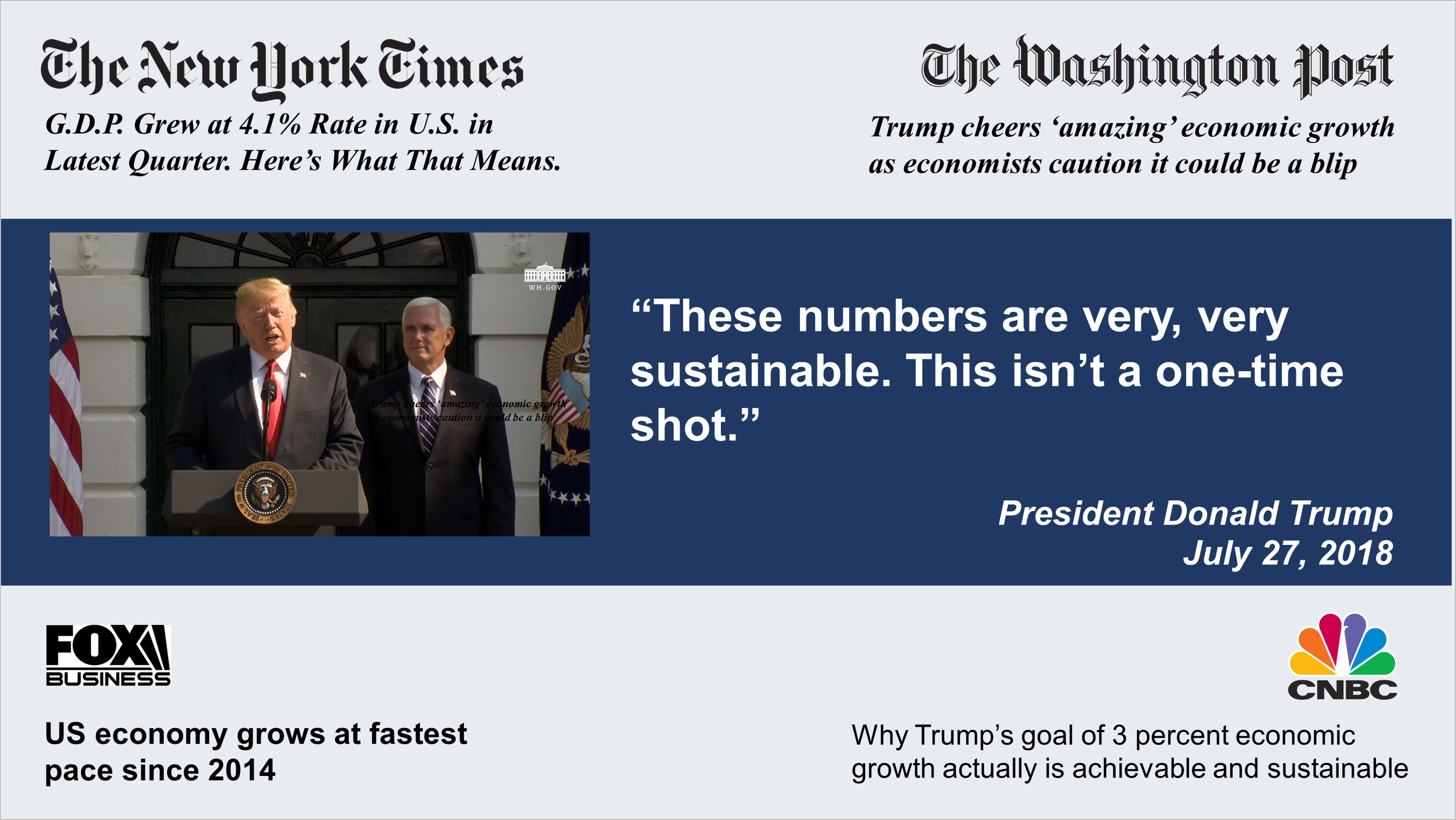 Quarterly economic growth in the three months ended June 30 surged by 4.1%, the best quarterly growth rate since the third quarter of 2014.


"As the trade deals come in one by one, we're going to go a lot higher than these numbers," President Trump said Friday morning, shortly after the Commerce Department released the gross domestic product figures through June. "These numbers are very, very sustainable. This isn't a one-time shot."

The president's remarks triggered speculation about U.S. growth in the months ahead. Here are relevant facts complied by independent economist Fritz Meyer, whose research we license to share with you when facts are hard to discern from opinion. 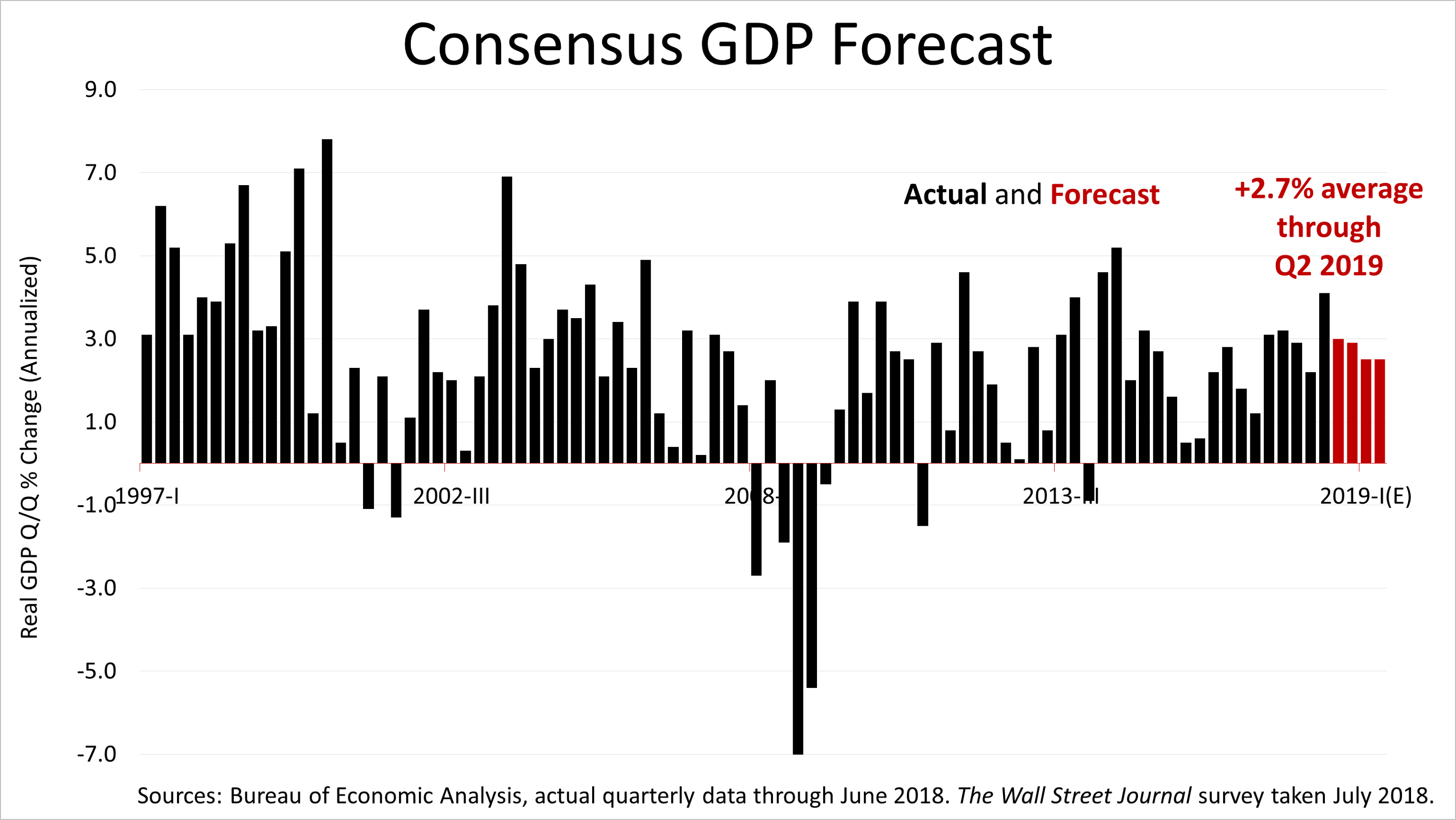 In early July, The Wall Street Journal surveyed 62 economists and the consensus was an average +2.7% rate of quarterly GDP growth over the four quarters ahead.

The consensus forecast was correct last month in predicting a 4.1% quarterly growth rate in 2Q2018.


The latest consensus forecast is for third-quarter and fourth-quarter 2018 growth of 3% and 2.9%, followed by 2.5% quarterly growth in the first and second quarters of 2019. 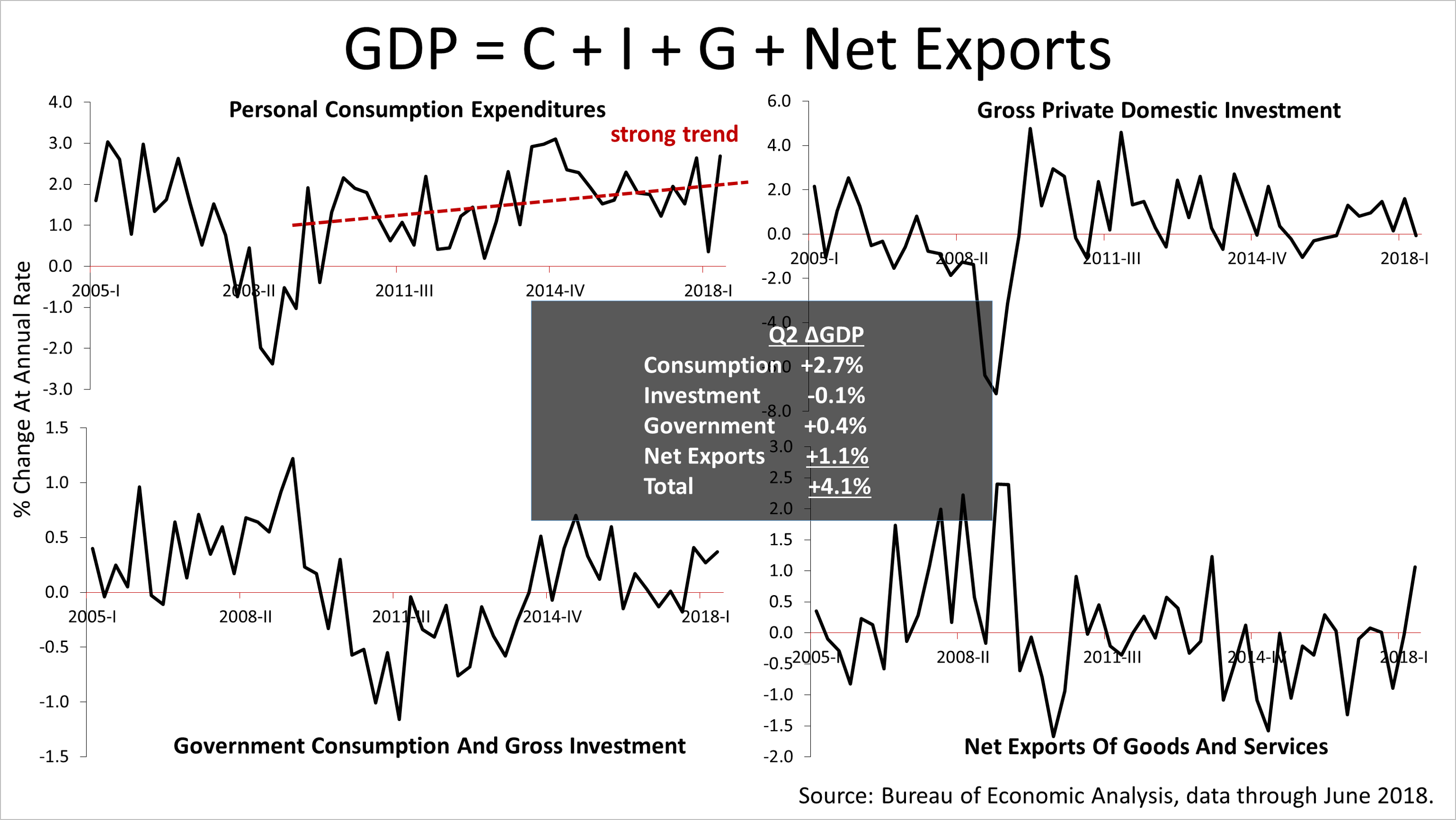 Consumer spending - the U.S. economy's key driver, accounting for 69% of GDP - posted a strong gain in its percentage contribution to GDP growth in the second quarter, extending the post-recession upward trajectory shown in red, a strong and long trend.

Meanwhile, higher net exports' contribution to GDP growth in 2Q2018 resulted from the surge in exports of soybeans and petroleum products. The surge in soybean exports stemmed from foreign buyers' fears of coming tariffs - likely an unsustainable event. 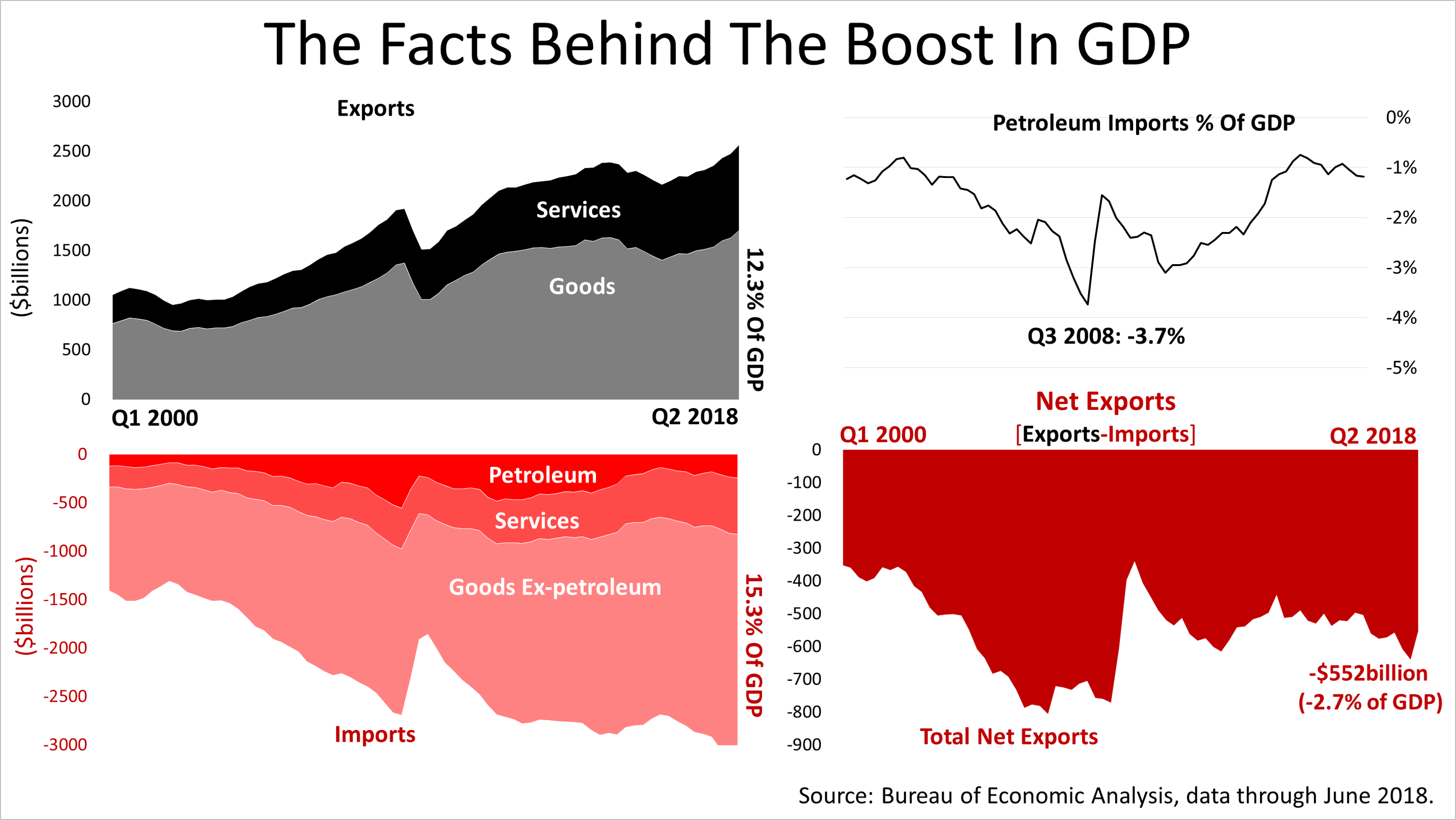 Net exports also contributed more to GDP because the U.S. imported less oil and that is a sustainable trend. Imports are a drag on GDP growth. With imports of oil declining dramatically since 2008, net exports improved. Oil imports comprised 3.7% of GDP in 2008 but that is down to 1.1% today. That's a 2.5 percentage point jump of GDP growth now being contributed by domestic oil production. 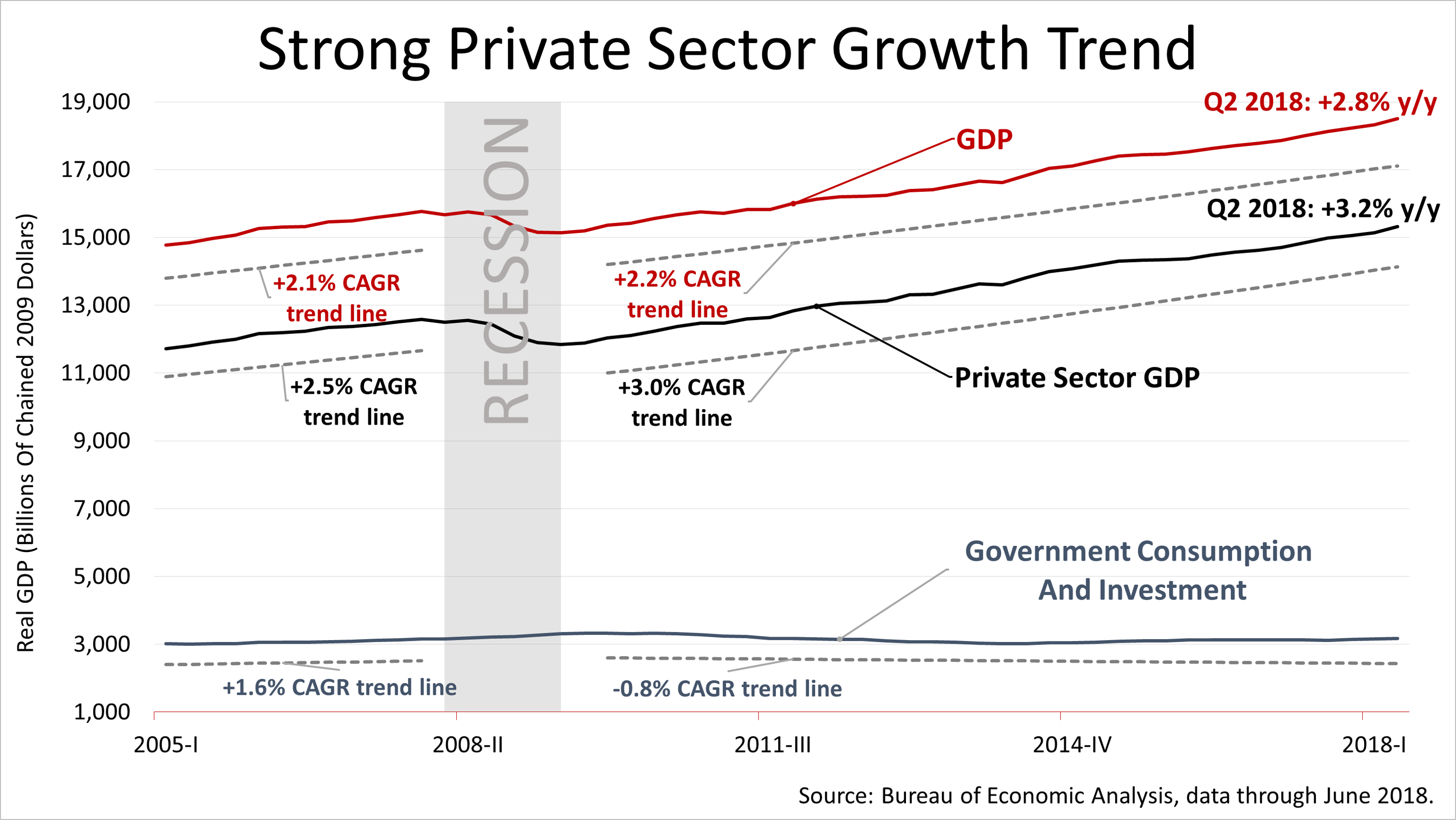 GDP growth accelerated much more sharply than the average 12-month rate of growth in the previous nine years of the expansion. Since the expansion began in April of 2009, the economy grew at a 2.2% annual rate, but the growth rate in the most recent 12-month period through the end of June was a much-stronger 2.8%. 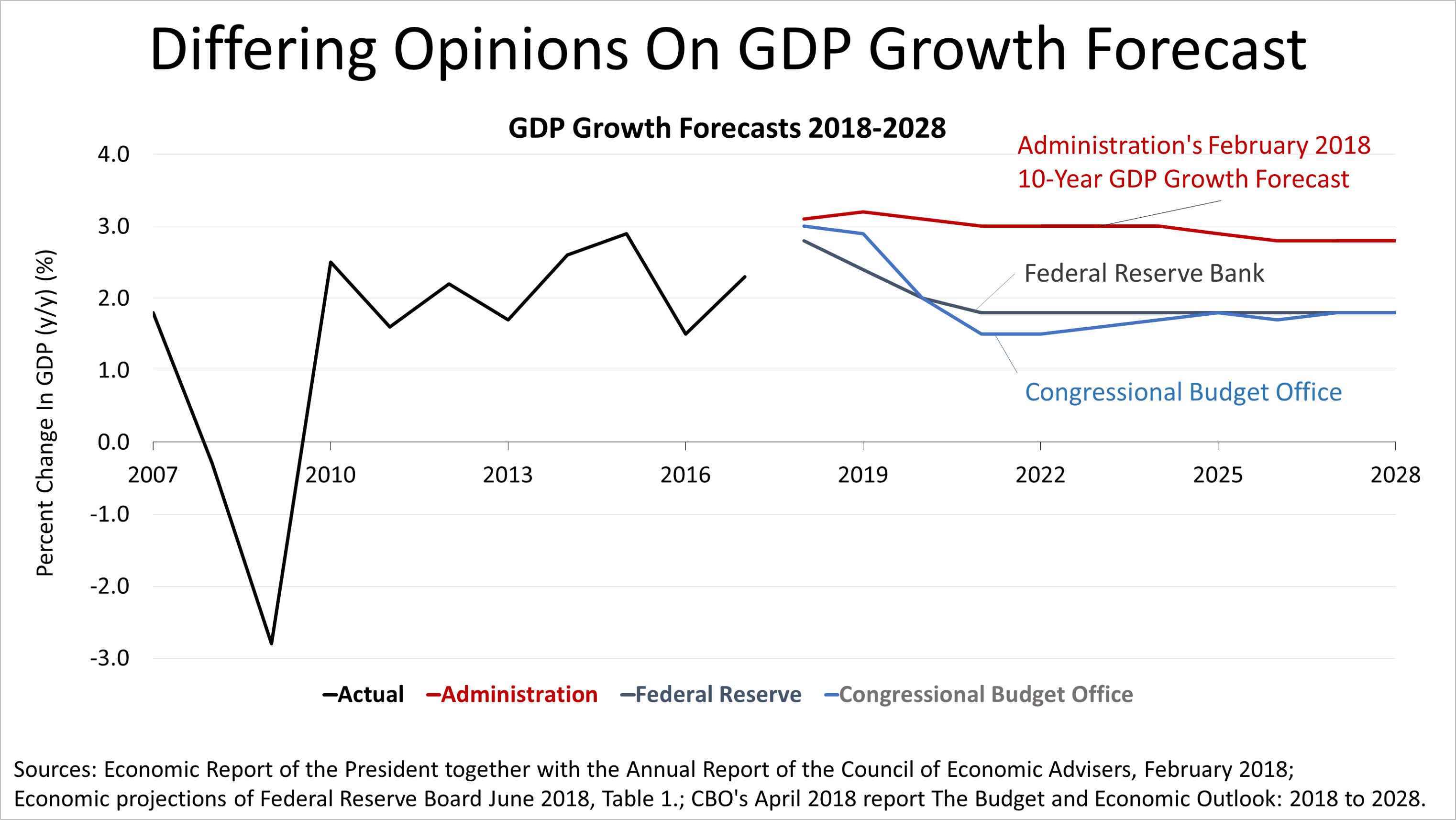 What's the bottom line? The Trump administration's forecast for GDP growth in February, the most recent data available, is shown here versus forecasts from the non-partisan Congressional Budget Office and the U.S. Federal Reserve Bank.

The difference between the Trump administration's growth forecast and those of the CBO, Fed, and private economists surveyed in The Wall Street Journal is explained by the administration's expectations about supply-side economics. Most economists remain skeptical that a big kick in growth will come from recent tax cuts, and that is the bottom line.

This article was written by a veteran financial journalist based on data compiled and analyzed by independent economist, Fritz Meyer. While these are sources we believe to be reliable, the information is not intended to be used as financial advice without consulting a professional about your personal situation. Indices are unmanaged and not available for direct investment. Investments with higher return potential carry greater risk for loss. Past performance is not an indicator of your future results. 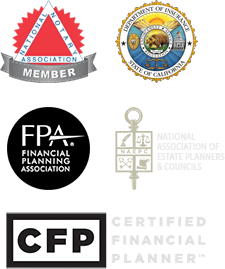